In an effort to stay connected and keep entertaining in the midst of Stay-At-Home orders, The Riverfront Playhouse in Aurora, Illinois will begin streaming three different productions of the Fat Bill’s Roadside Cafe series, a show that originally premiered at the Riverfront in 1987 but has seen various incarnations over the last 30 years. The streams will go live on YouTube for a limited time starting Friday, May 8th, with more content planned to follow on YouTube each weekend thereafter.

Originally written by the late Jack Schultz, Fat Bill’s Roadside Cafe is a country-western musical that tells the stories of an odd group of waitresses, truckers, cowboys, and the like as they go through a normal day in a roadside diner off some stretch of road somewhere in Nowhere, Oklahoma. The show stands out for its near-constant disregard for the fourth wall, making the audience as much a part of the show as any of the actors. The show also makes a point of not really taking itself too seriously while still maintaining a familiar structure to that of any stage musical, which makes it feel wholly original within a traditional musical format. While Fat Bill’s was produced 13 times across 30 years, no two productions were exactly the same, as songs and plots would change from script to script.

The Riverfront Playhouse is excited to be sharing these productions virtually for the first time ever. The performances, all recorded live in front of an audience that was not paid to laugh, were filmed by Meyerfilm, Inc. on location at The Riverfront Playhouse. The three productions that will be streamed were recorded in 2008, 2011, and a version in 2018 that was written and directed by Jack’s son, Jackson Jackson-Schultz.

“Considering what we are all in the midst of, it feels like the perfect time to share these laughs with everyone stuck at home,” Jackson-Schultz says. “When we produced my version of the show in 2018, it brought a lot of people together that hadn’t seen the show in such a long time, if at all. The audience, the cast, the crew… There was a powerful buzz around seeing these colorful characters again. I’m hoping that buzz will help people who need it more than ever these days.”

Jackson-Schultz adds, “The benefit of having three separate productions to watch is that each one is a completely different play. Different songs, different casts, different plots. Whether you have seen a production live before or if this will be the first time you’ve ever seen a Fat Bill’s presentation, this will definitely be the most fun you could have binge-watching a show that doesn’t involve tigers.”

The Riverfront Playhouse, a non-profit organization, will also be setting up a donation account to help offset lost income for the theater due to Covid-19. The Riverfront will communicate through its Facebook, website, and e-mail account about updates regarding further streaming content and eventual reopening.

“We are in a very fortunate position to have the rights and recordings of this truly unique, loveable play,” says Heidi Schultz, President of the Board of Directors at the Riverfront and daughter of Jack Schultz, the shows' creator. She is also a featured performer in the 2011 and 2018 productions of Fat Bill’s. “My dad was very protective of these shows, but we believe that he would have wanted to contribute any kind of joy that he could during this time.”

It should be noted that the content of these plays is extremely mature and may not be suitable for all ages. The graphic language would likely receive an R-Rating, and therefore should only be viewed by those who are children at heart, but not actually real children. 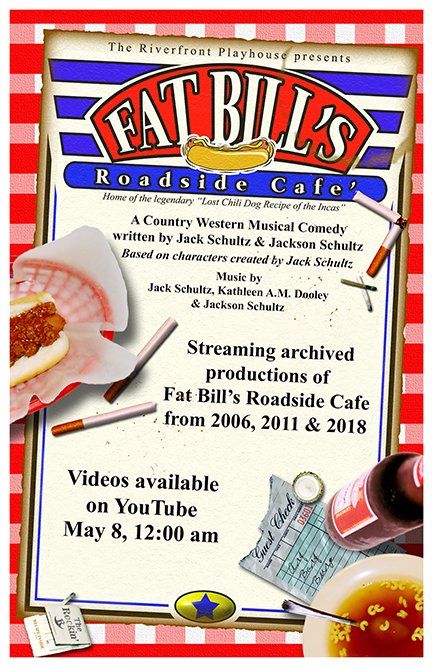