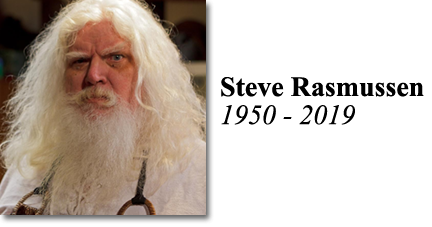 Our hearts are heavy today. Longtime friend of the theater Steve Rasmussen passed away peacefully on February 24, 2019. When he wasn't on stage, he could be seen in his favorite seat in the back of the theater laughing at all of our jokes, even the ones he'd heard a hundred times before. Anyone that knew Steve knew he had a big, lovable heart to match his big personality. The Playhouse and the City of Aurora have lost a great actor and an even better friend. 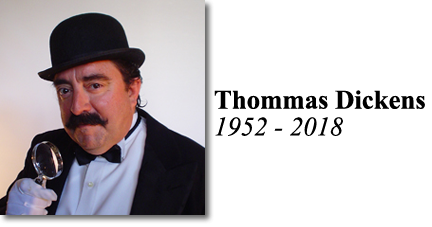 It is with heavy hearts that we announce that Riverfront Playhouse regular and former board member, Thommas Dickens passed away on January 14, 2018. Thom has been a mainstay at the Riverfront Playhouse since his earliest appearance on its stage in 1978. Many will remember Thom from numerous performances including iconic roles as Van Helsing in "Dracula," Ebeneezer Scrooge in "A Christmas Carol," and our beloved Burt in "Fat Bill's Roadside Cafe."
For many of us, Thom was more than a fellow actor or theater colleague. Thom was a member of our family, and we are deeply saddened by this great loss. 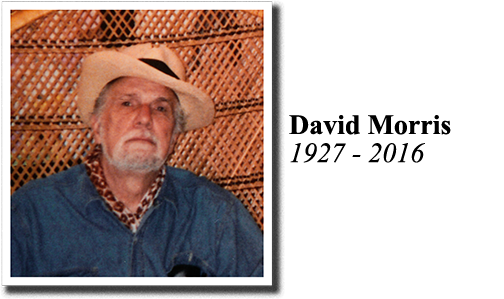 It is with great sadness and heavy hearts that we share (with the permission of his family; and our heartfelt condolences are with them) that our founder, David Morris, passed away, peacefully, last night in his sleep.
David's dream of a community theater in Aurora has grown and thrived for 38 years. This is the man whose singular vision brought untold numbers of us together over those years and united us in our love of theatre.
He was more than our founder. He was a friend and a mentor. He was a legend among us and our father.
He will be thought of fondly and missed beyond words.
For those of you who knew David Morris and wish to join in a celebration of his life, come to the Riverfront Playhouse, 11-13 S. Water Mall, Aurora, IL 60505, Sunday, March 13 at 2pm.
Since David was in show business his entire life, I think it's appropriate to mention that there will be a wholly INAPPROPRIATE video at some point in the proceedings, which will feature David telling the GREAT BULLMOOSE JOKE.
David was famous (infamous?) for telling jokes and no joke is more associated with him than this one. 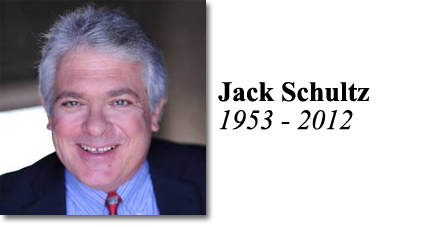 Born John Erdmann Schultz Jr. in 1953 in Johnstown, Pa., he earned a B.A. in journalism and taught English and coached sports for a time at St. Benedict Catholic Middle School. He later spent 32 years with MetLife, which transferred him to Aurora in 1976. He was a senior business systems analyst, who retired early in 2009.
An incredibly talented playwright, musician, songwriter, actor, and director, "retirement" simply meant more time for Jack's many artistic pursuits. Jack had met his best friend and soul-mate, Sherry Winchester, at the Riverfront Playhouse in 1983 and they starred in "White Cargo" in January of 1984, the first of many productions together. They married on Sept. 3, 1988, and just celebrated their 24th wedding anniversary. Their son, Jackson, arrived in 1989. Daughter Heidi was nearly born onstage in 1990 during a production of "On Borrowed Time."
Jack wrote some of Aurora's most beloved stage productions, including "Fat Bill's Roadside Cafe," and "Night of the Living Dead: The Musical." Every few years since 1987, Jack wrote a fresh play for the consistent characters of Fat Bill's, taking them through the many stages, twists, and turns of life and endearing them to generations of fans. 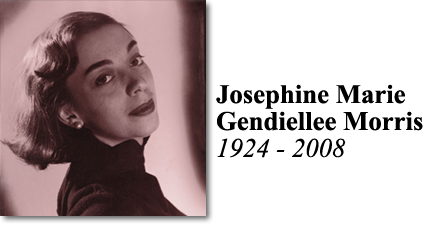 Known professionally in Actors Equity as Jo Morrison, Jo was a marvelous actress and singer, highly regarded by such local groups as the Dramatics Club, the Lamplighters and Playmakers. She also appeared in many professional theatres throughout her career, including Mill Run, Candlelight Dinner Theatre and Pheasant Run Playhouse (where she was nominated for a Joseph Jefferson award for best supporting actress in Desk Set, starring Kaye Ballard). She also served on the original board of directors of the Riverfront Playhouse in Aurora, which was launched by her husband David in 1978.
She and David celebrated 54 years of marriage and raised four children, while making a living in the theatre -- a most difficult endeavor! But much as she loved the theatre, the center of her life was always her children, her grandchildren and her great-grandchildren!
She will be dearly missed by her husband, David; her four children, Mark (Sharon) Morris, Christiane (Gary) Morris, Grey (Ann) Morris, Hugh (Viorica) Morris-Stan; her grandchildren, Adam, Ryan, Saragrace (Brian), Evan, Colin, Analissa, Gabriel, Doria (Vinnie), Adam, Keaton and Reeves; and her great-grandchildren, Angelo, Alyssa, Anthony, Alexa, and Theresa; and her beloved nephew, Michael McClanathan.
No one who knew Josephine Morris and needed her for any reason was ever turned away. The love she brought into this world will live forever, as will she in all of our hearts! 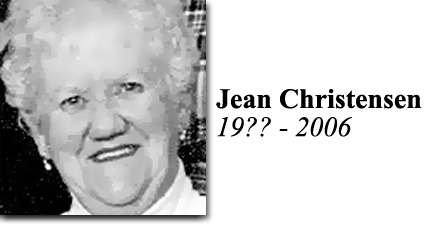 Jeannie appeared in a number of plays here at the Riverfront, including, Arsenic and Old Lace, Getting Away With Murder, Move Over Mrs. Markham, The Torchbearers, Sherlock Holms and the Curse of the Baskervilles, The Gin Game, The Prime of Miss Jean Brodie, Not Now Darling, Enter Laughing, Everybody Loves Opal, and so many others.
Not only was she a consummate actress with impeccable comedic timing and professionalism, but she was a valued supporter of the playhouse who shared her talents with us throughout our history.
Most of all, she was a Friend.
She will be sadly missed in ways that we haven’t even begun to realize, but she will live on in the memory of her friends, her fellow actors, and the audiences that she delighted over the years.
So long, Jeannie. We’ll see you on the other side.